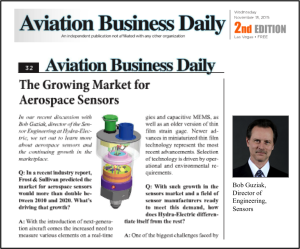 In the article, “The Growing Market for Aerospace Sensors,” Aviation Business Daily interviews Hydra-Electric’s director of sensor engineering, Bob Guziak, about sensor technology and the growing demand for sensors in the aerospace marketplace.

“One of the biggest challenges faced by sensors within critical aircraft systems,” said Bob Guziak, “is the ability to maintain accuracy over extreme conditions and extended usage. We have developed innovative designs to address these and other issues. What we’ve learned from customers is that Hydra-Electric has been able to solve problems their engineers didn’t think could be solved. For example, Hydra-Electric builds sensors with the ability to survive high-speed impulses, pump ripple, or high pressure cycle counts theoretically into the billions. We’ve been able to eliminate common failure modes such as pressure spike damage, burst diaphragms, broken wire bonds and media leaks.”

To read the full interview, follow this this link:  The Growing Market for Aerospace Sensors