Burbank, CA – June 12, 2015 — Hydra-Electric Company, a provider of breakthrough technology in sensors and switches for the aerospace industry, announced that it will be introducing a new line of transducers which can now withstand temperatures up to 225°C for pressure sensing and 300°C for temperature sensing. The Company will be showcasing this and other solutions at the 2015 Paris Air Show, where it is exhibiting in Hall 5, Stand C-249. 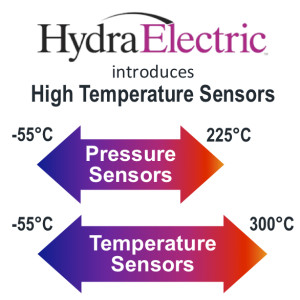 “Unlike sensors based on older technology, our high temperatures sensors can survive pressure spikes, avoid failure due to pump ripple, and also withstand a high number of pressure cycles,” said Bob Guziak, Director of Sensor Engineering at Hydra-Electric. “We can offer our customers a much more robust sensing solution that won’t break and helps them to avoid pressure spike damage, burst diaphragms and broken wire bonds.”

“While a few of our competitors offer high temperature transducers based on thin film technology, these solutions are very high priced,” remarked Tim Burmood, Director of Sales. “The new Hydra-Electric transducers for high temperature environments offer both robustness and reliability, as well as competitive pricing.”

Hydra-Electric is currently accepting RFIs for its high temperature sensors, which are targeting full EMI spectrum, as well as full lightning spectrum. Like Hydra-Electric’s current offering of transducer products, the newest additions will provide for linear accuracy over the entire spectrum, and also allow the ability to tailor the sensor to any operating parameter (e.g., accuracy, sensitivity, output format, input/output impedance, amplified vs. non-amplified, etc.).