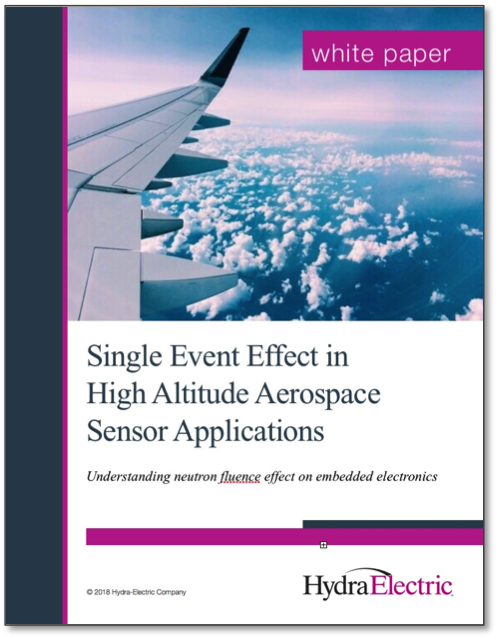 Single Event Effects (SEE) can result in catastrophic consequences for aircraft. SEE was identified as one potential factor contributing to the failure suffered by Qantas Airlines Flight 72 on October 7, 2008 when the Airbus A330-303 was en route from Perth to Singapore. When incorrect data entered the flight control systems, the plane suddenly and severely pitched downwards, rapidly descending 650 feet in about 20 seconds before the pilots were able to regain control. The incident caused significant injuries to 110 passengers and nine crew members.

“As aircraft fly to higher altitudes, they have decreased protection from ionizing radiation due to lack of atmospheric protection,” said Bob Guziak, Vice-President of Engineering at Hydra-Electric. “Our concern for aircraft at these upper elevations is the effect high-energy neutrons have on the performance of electronics. Our engineers at Hydra-Electric find solutions to minimize or eliminate potential upset from these Single Event Effects.”

Single Event Effects occur where the high-energy particle collides with the structure of an electronic silicon device. The collision affects the function of the circuit through transient, discrete, or permanent atomic level interaction. While these upsets may be rare, with millions of flight hours occurring each day, disruptions have been reported in the performance of electronic devices in aircraft incidents traced to the effects of this radiation.

The white paper also discusses optimum component selection, and how an accurate estimation can be calculated to determine the effects of radiation on aerospace electronics and thereby employ solutions to eliminate or reduce Single Event Effects.

Understanding the levels of neutron fluence causing SEE in high altitude aerospace sensors allows selection of appropriate components that eliminate or reduce SEE. Prediction of the upset as well as effectiveness of prevention can be determined by understanding the physical configuration of electronic components exposed to high altitude neutron radiation. Units may be tested, but an accurate estimation can also be calculated to know the effects of radiation and eliminate or reduce SEE.

For those neutron flux conditions capable of creating a critical level of upset, the probability of an event can be made small by selecting the geometry and complexity of the electronics included. If the predicted radiation is still considered a risk, mitigation can be added to minimize any probability of significant events.