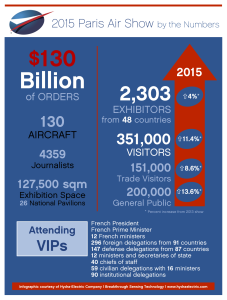 The SIAE announced record-breaking figures coming out of the 51st International Paris Air Show. The impressive numbers shared in their press release inspired us to create a visual representation as an infographic. Hydra-Electric was proud to be a part of this spectacular event. (More about Hydra-Electric’s presence at #PAS15).

You can read the press release by downloading the 2015 Show Report at the SIAE website.

This site uses Akismet to reduce spam. Learn how your comment data is processed.