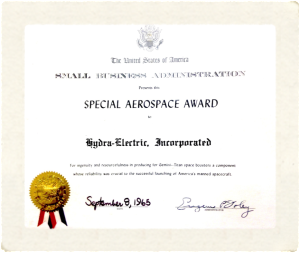 …on September 8, 1965, Hydra-Electric received a Special Aerospace Award from the U.S. Government for:

“ingenuity and resourcefulness in producing for Gemini-Titan space boosters, a component whose reliability was crucial to the successful launching of America’s manned spacecraft.”

An Air Force general and several other officers came to Hydra-Electric to present the company with a Gemini flag along with the certificate. “It was a big deal,” recalls Frank Davis, Hydra-Electric Vice-President, “as they only awarded the Gemini flag to about a half dozen small companies whose components were mission-critical to the operation of the Gemini spacecraft.”

That spirit of ingenuity and reliability lives on today within Hydra-Electric. Creating reliable and robust components continues to set the company apart in its offerings for aerospace applications.

Learn more about what makes our sensing technology superior.

One thought on “50 Years Ago This Week…”

This site uses Akismet to reduce spam. Learn how your comment data is processed.