Congratulations are well-deserved for John Tang on his recent retirement as Hydra-Electric’s Chief Engineer of 33 years. And at a recent retirement party, we honored his decades of contribution to the company. John initially worked for Hydra from 1976-1978 as a mechanical engineer, then was lured back in 1985 to lead the engineering department. 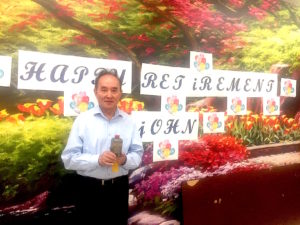 When asked what achievement he was most proud of during his time at Hydra, John said it was when Hydra-Electric received the award from Northrup Grumman as the Small Business Supplier of the Year in 1994. John had designed the switches for the hydraulic system of the F-18, which were qualified in record time. The award was a welcome acknowledgement.

John really began his career while he was an industrious high school student with his very first job as an inspector and quality controller at Precision Machining Company in Pasadena from 1964-1966. John went on to receive a Bachelor of Science in Mechanical Engineering, as well as a Masters in Applied Physics from East Texas State University.

The Hydra-Electric family wishes John well and sincerely thanks him for his 33+ years of service!