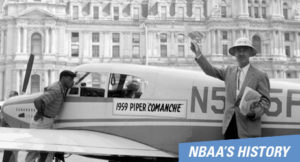 The NBAA is underway October 10-12 in Las Vegas, but what about the early days?

As the world’s largest business aviation event, we wondered about how the National Business Aviation Association got its start. So we looked into the organization’s history and thought we’d share some of the highlights.

May 17, 1946  |  In response to a resurgence of commercial, business and personal flight following World War II, thirteen people gather for the first informal meeting at Wings Club in New York City to address the need for an organization to promote and protect business aircraft operator interests.

February 17, 1947  |  Incorporators and Members meet to establish the permanent organization as a not-for-profit corporation.

September 24, 1947  |  At the first annual meeting of the membership, the treasurer reported $1,239 on hand. The 19 company members approve the new association’s preparatory work and vote to elect nine members of a permanent board of directors.

January 1951  |  In response to the Korean War, the Civil Aeronautics Administration (CAA) suggests CAOA move to Washington DC to work more closely with CAA in the handling of wartime priorities for aircraft parts, supplies and equipment.

June 26, 1953  |  A special meeting is held at Wings Club to address an organization that had become national in scope with a growing diversity in its constituency. The more encompassing new name was the National Business Aircraft Association.

TODAY  |  From the original 19 companies in 1947, today the NBAA supports 10,000 member companies. These companies collectively employ over 19 million people worldwide, and earn approximately $5 trillion in annual revenues, contributing more than 50 percent to the gross national product.

The NBAA has developed into a strong, internationally recognized organization. Throughout its history, the association has thrived by maintaining a focus on its guiding philosophy to represent and protect the aviation interests of its members with a united front to improve aircraft, equipment, and service, and to further the cause of safety and economy of business aircraft operations.

NBAA collects, interprets and disseminates operational and managerial data related to the safe, efficient and cost-effective use of business aircraft. The Association is the focal point for identifying and understanding advances in technology and procedures important to the business aviation community.

Hydra-Electric is a proud NBAA member and Exhibitor (C7706). We look forward to continuing our support of the business aviation industry as we further develop innovative solutions in sensor and switch technology.