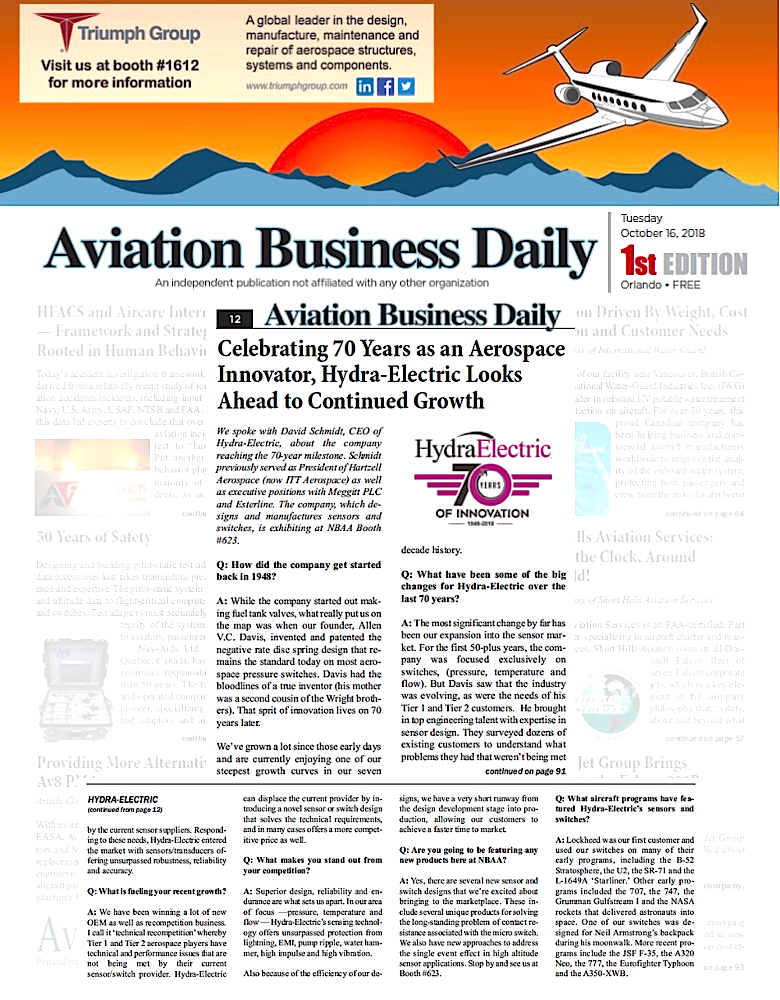 An interview with Hydra-Electric CEO David Schmidt was published in the 1st Edition of Aviation Business Daily’s coverage of the recent NBAA-BACE in Orlando, under the headline “Celebrating 70 Years as an Aerospace Innovator, Hydra-Electric Looks Ahead to Continued Growth.”

During the Q&A, Mr. Schmidt marks the innovative beginnings of Hydra-Electric when founder Allen VC Davis invented and patented the negative rate disc spring, a design that’s still the standard today on most aerospace pressure switches. He traces the evolution of the company from exclusively focused on switches to an innovator in the sensor market.  When asked what makes Hydra-Electric stand out from its competition, Mr. Schmidt remarks that the “superior design, reliability, and endurance” of the company’s sensing technology is what sets it apart. He goes on to mention that, “because of the efficiency of our designs, we have a very short runway from the design development stage into production.”

In addition to describing some of the aircraft programs that have featured Hydra-Electric sensors and switches, Mr. Schmidt talks about the new sensor and switch designs the company brought to NBAA. These included products for solving the long-standing problem of contact resistance associated with the micro switch, and new approaches to address the single event effect in high altitude sensor applications, the former of which the publication covered in a front page article of it’s 2nd Edition during #NBAA18.